The Unlikely Legend of Rusty Pup is a charmingly dark puzzler by the developers at Gory Detail Limited. The game plays like an old tale being told with full voice acting doing the narration in each level. You play as a sad little puppy that thinks it’s a toy (or a toy that thinks it’s a puppy?). Your pup is constantly on the move. Your job is to pretty much guide him where he needs to be. This can be things like switching on and off lights, building bridges over gaps, or laying scents. The first couple levels kind of eases you into things and almost feels too easy. But, once you get to level 3 or 4, things get tricky. The game is all about trial & error and good memory. Each level is under a time limit, so you’ll need to get your pup to the end of each level as quickly as possible and of course, alive. This usually takes a few tries until you figure out your surroundings. Rust Pup may not be for everyone. There’s not a lot of action going on and there’s a lot of repetition. It’s all about making a handful of strategic moves each level. Regardless, the story is really good (but sad) and the visuals/theme are absolutely amazing. If you’re a fan of puzzlers or strategy games, Rusty Pup is definitely worth picking up. 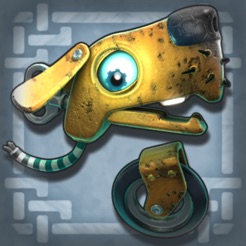 Rusty Pup is also in this week’s SNAPP Roundup!