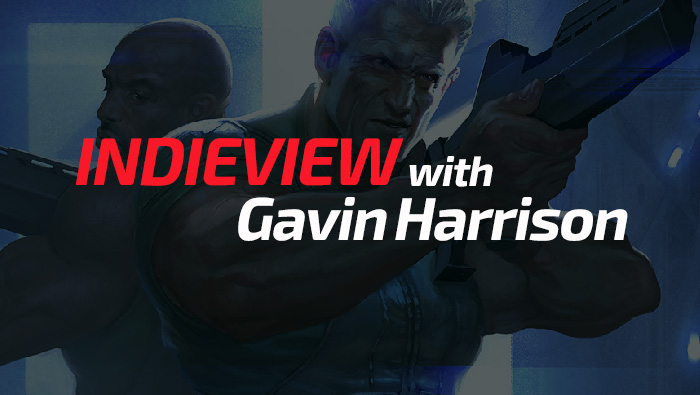 Gavin Harrison is under the indieview spotlight. If you are involved in the indie game scene then this is a name you surely already know, especially seen as Mr Harrison composed the music for 2 of the big indie titles released Summer 2014 on Steam – ’Tango Fiesta’ and ’Halfway’. So sit back, relax and let’s get to know Mr Harrison even more.

The following Indieview is from the Archive, mid 2014. We thought it would be fun to post this as we don’t often have sound designers here on SNAPPZILLA. Although, a great deal of Gavin’s work is for PC and console,  the inspiration, techniques and insight into his mind is relevant to mobile games.

How did you get started writing music for Games and can you tell us your first game you worked on?

My first steps into music were via the demo scene on the ZX Spectrum, I had started out life programming from a very young age but it eventually became clear that music was the path I should follow. I used SoundTracker extensively, and at one point even build my own MIDI lead to connect my keyboard to my Spectrum…I’m sure I must have my earliest compositions stored on tape somewhere! I’m pretty much mostly self taught, I had a few lessons on the church organ and studied music up to A-Level but that was it.

The first game was called ‘Birdie in Trouble’ from Kilk! Games, and I actually did some SFX for that! It came about from the developer asking on the Touch Arcade forums if there was anyone who could help out with providing sound effects. I believe the first game I provided an actual music track for was ‘Fastball 2’, from the same developer. From there I gradually picked up a bit more work, before approaching Orange Pixel with the offer that I would write the soundtrack for their next game (which was called INC) on a ZX Spectrum, so they were some very authentic chiptunes! The rest is history as they say…you can never really pinpoint the exact moment where going full time music / sound effects became a reality but it just seemed to happen that way. I’ve been very fortunate but you have to take every opportunity sent your way!
What is your process for writing a soundtrack to a game?

This really does vary from game to game, but I’ll try and go into more detail about the general process I like to follow. I usually start by meeting with the developer and chatting (with the nature of the work this sometimes is only possible via Skype / email) about their plans for the game, the sort of mood they want to convey and the part they would like the audio to play. A great game soundtrack can vary from playful chiptunes or energetic guitars, to the more atmospheric ambient style. I find obviously it’s important to listen the developers ideas on what they would like for the game, but not to be afraid to suggest your own…after all they will have brought you on board for your expertise! In fact most of the time I’d say the eventually audio is usually a combination of developer input and composer ideas. One other key thing I like to find out, what music has the developer been listening to (if any!) during development to date…that is usually a good indicator of mood for the future! Also at this point I’ll go through any concept art and if there is a playable version of the game, spend some time playing it!

What instrument is your prized possession?

Ooo there could be a few here, it’s probably a tie between my Juno 106 synth and the Fender Mk1 Rhodes electric piano!

Is there a game genre you would like to work on that you haven’t already?

I’ve been thinking about this, and I’m not sure if there is, I can honestly say I enjoy working in all genre types and I am fortunate enough to often have the chance to! Musically…I’d quite like to do some sort of futuristic synth soundtrack based around the styles of Vangelis and Jarre mixed with a little Daft Punk, so if anyone wants to come up with a game for that… 😉

Have you ever taken part in a Game Jam, can you tell us a little about your experience?

I sure have, I’ve taken part in a few and can honestly say I love them. In fact one game I’m working on now (Tango Fiesta) was born from the Rezzed game jam! I find the time pressure really pushes you to make quick decisions and actually I find the whole situation less pressurising, being able to produce anything at all in such a short space of time is an achievement in itself.

Where do you get inspiration from?

Well I suppose this would come from other artists…Lately I’ve been pretty bad at keeping up with music, but I do try and listen to as much new stuff as possible. I’m a huge fan of Telefon Tel Aviv, in fact if it wasn’t for their music I doubt I would be writing still today. I’d just about given up writing music altogether a few years back, and then I heard a song of theirs called ‘Sound in a Dark Room’ and it absolutely blew me away! I try and play games as often as I can and obviously pay a lot of attention to the audio in each one, it’s always interesting to hear what other composers are doing and how they have interpreted a certain game genre with their music. I do also as you might expect pay extra attention to the music when watching films, always interesting to listen to the techniques employed by musicians to add to the atmosphere / mood.

What music excites you?

Ha, lots! Seriously, I wouldn’t know where to start really, I love hearing new music, there is so much to discover out there… so maybe new music is what excites me?

When you are writing and creating music do you have a fav snack or drink on hand to keep you going?

I’m pretty routine about snacking and drinking, if only to make sure I don’t overdo the coffee / food! Usually a couple of coffees during the morning and maybe a biscuit or a little bit of chocolate. Other that I drink a lot of water during the day. I actually find keeping sort of near normal working hours (so usually starting at 9am and finishing around 6-7pm) suits me best. Once in awhile I’ll stay up late but my studio is away from my house, so I have quite a good work / life separation.

Who would you like to collaborate with, be it for TV, games or film?

What’s in the pipeline for you, if you can discuss it here of course?

Having finished on some large long term projects over the summer, I’m now currently preparing the Halfway soundtrack for release. Tango Fiesta is currently in early access so is an on going project, with some big audio updates to come still! There are a couple of other things that I’m hoping all go ahead but I can’t say much more yet…some TV related too!

Visit Gavin Harrison’s official site to find out more about his great portfolio of work.