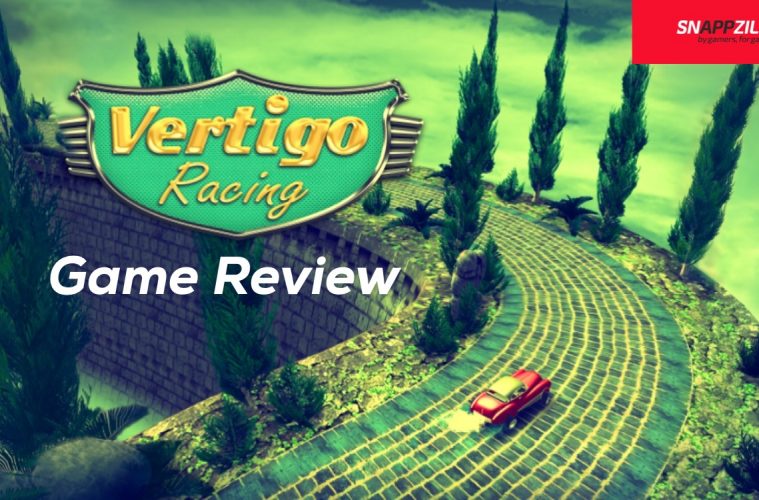 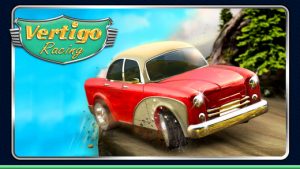 I’m not sure if you know this, but I love me a good racing game. I’ve always been a fan of the genre. I’m sure a lot of it is because I used to race cars in real life when I was younger. I don’t consider myself a “gearhead” or anything, but to this day, I still turn my head when I hear a rumbling exhaust. I do all my racing in video games now. That’s why I was excited when I fist caught a glimpse of Vertigo Racing on the App Store.

If I had to put a label on Vertigo Racing, I’d probably put it in the “endless racer” category. It’s different than most in its genre though. It’s weird, because at first glance, I thought it was going to be a totally different style of game. More like a traditional style racing game with gas/brake/steering/opponents/etc. So, I was actually kind of bummed out when I first started playing it. There’s no steering your vehicle in Vertigo Racing. There are no opponents. You’re pretty much just trying to conserve fuel and stay on the track. You do this with only a gas and brake pedal. The vehicles (kind of) steer themselves. Like I said, at first, I didn’t like this. Nope! I didn’t like it at all! I thought it was too easy. “All I have to do is hit the gas and watch my car drive itself??” Yea, I was a little too over confident with myself… 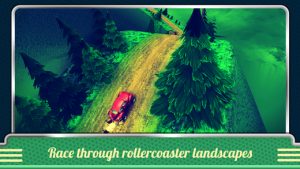 Vertigo Racing is definitely a tough nut to crack! Your vehicle speeds down these long narrow winding roads and the slightest mistake can send you flying over the edge or running you right into a tree. It’s all about “feathering” the gas and brake pedals. You can only get so far before you crash if you are just pushing the gas the whole time and riding the brake will end up causing you to run out of fuel. So, it’s all about finding that balance.

There is still a sense of urgency in the game though. Your fuel is constantly draining while your driving, so you have to kind of drive hard to make it to fuel stations that are spread out across each run. If you drive well, you can add on to the remaining fuel in your tank. Think of it as a timer that’s constantly winding down. If you make it to a checkpoint with extra time, that time is also added. It helps out for when things get tough later on down the road. 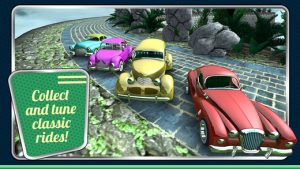 One cool thing is that all vehicles are upgradable. You can upgrade you top speed, acceleration, fuel, and damage. (Yes, each car has a certain damage level. Too many tree or rock bumps and that’s it.) You can purchase upgrades by earning cash in the game. There’s two ways to earn cash. You earn it just by how far you get each run and by side missions. Missions are usually something like, “drift for 500 ft” or “jump x amount of times”. That’s where you make the big bucks.

There are 10 cups in 10 different championships and 10 vehicles. Each championship is pretty much a new level, so there are 10 different endless levels. To earn a cup, you need to pass a predetermined point with an unlocked vehicle. Passing cups is how you unlock the other vehicles. It’s kind of tough to explain and I’m probably confusing everyone. Honestly, it makes sense in my head right now.

The visuals in Vertigo Racing are absolutely stunning. Everything is highly detailed and has a neat vintage look to it. The whole game has this really cool 1950’s vibe going on. From the vehicles, to the music, to even the filters they use. Each track has a unique theme as well. Ranging from cobblestone roads and small hills in the Mediterana level, to snow cover roads in the Nordpeaks, to spooky moonlit dirt roads in the “Moonroad” level. The vehicles are all modeled off of real world cars in the 50’s. From old VW Beetles, to Ford Pickups and all behave differently and can all be painted to the color of your liking. (Side note: I wish you could change up rim/tire styles. All vehicles come with the exact same rims and tires on them. Maybe I’m just being picky?) 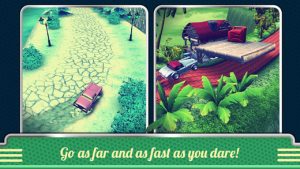 Of course, Vertigo Racing is F2P. With IAPs ranging from $1.99 to $49.99 for coin packs. Honestly, I never felt any need for coins when playing. Actually, right now, I’m sitting on over 7,000 coins that I have nothing to spend on until I unlock the next vehicle. There is also a coin doubler and an ad remover IAP. There are no timers in the game, so once you get rid of the ads, it’s pretty much a “premium” game. You can also watch a 30 second ad to get rid of ads for 10 minutes at a time.

Vertigo Racing is definitely worth trying out. Especially if you’re a fan of racing games. It may not be for everyone. It gets pretty “arcadey” at times and the physics can get crazy. The game can also get repetitive and frustrating at times. Especially when your trying to earn a cup that takes a good 5 minutes or so to pass, just to wreck 4 minutes in and have to start over. I’ve had my fair share of rage quits with this game. But, all in all, the game IS fun and that’s all that matters. Plus, there isn’t a whole lot like it on the App Store, so it has its “unique-ness” going on. (Yea, I like to make up words.) Kudos to Deep Byte Studios for making something a little different and to Chillingo for believing in them enough to put their name on it.