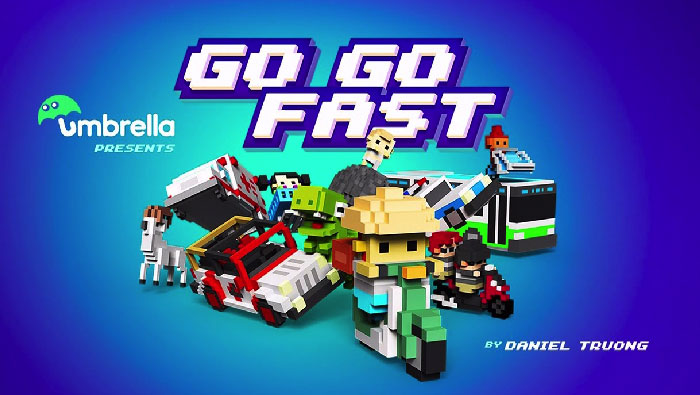 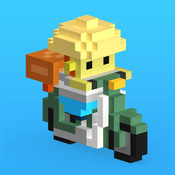 I had the luxury of playing this game in its very early stages. So, I’m doing my best not to be biased. I will say that the game has come a long way and there was a lot of love put into it.

Go Go Fast was created by indie developer, Daniel Truong and published at the end of August under the “umbrella” of Umbrella Games. (Get it?) I’ve heard it be called a cross between Crossy Road and Crazy Taxi. I guess that’s *somewhat* right. 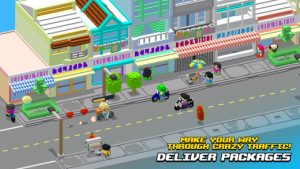 Go Go Fast is about going………umm, going fast. It’s kind of an endless side scroller game at heart where the object is simple. Get as far as you can before your inevitable demise. The game has so many changes, but the core gameplay stays the same. Like in the beginning of the game, you start off as a mail carrier on a scooter and your have to deliver packages to randomly generated destinations. It sounds easy, but the roads and sidewalks are littered with traffic and pedestrians that take away a chunk of health every time you run into one of them.

Your health meter is your lifeline in the game. (No pun intended for the first time.) It’s also your fuel meter. It’s constantly on the decline, so you need to pick up random fuel tanks that are spread out all over the place. This will keep you going. Like I said, the game is endless, so you can have runs that last 5 minutes or 5 seconds. 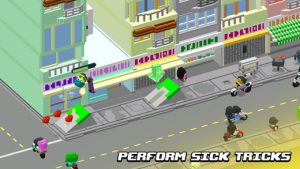 You earn “hearts” for every delivery you make. These hearts will be tallied up at the end up each run and added to a “bank” if you will. Once you get a certain number of hearts, you can unlock different vehicles. This is where the game really shines in my opinion. There are 20 different vehicles to unlock and each vehicle has different stats and behaviors. They also completely change the game up, yet sticks to its core. For instance, you can unlock an ambulance and the object is to pick up patients, a skateboarder where you have to hit ramps, or a cyclist where the object is to not touch anything on a run, or a wrecking ball where the object is to wreck everything. You get the idea. The game changes up enough to keep things from getting stale.

The ads aren’t very intrusive, there are no timers, and everything is obtainable by just playing the game. There are IAPs for extra hearts for the impatient and an ad remover. GO Go Fast is one of those games that is just fun to play. You’re constantly wanting unlock the next thing. The only thing I would have liked to see was different backgrounds. Like changes in the scenery and roadways, but by all means, it’s not a deal breaker. Between cheeky humor, the nice chunky pixel art and the change ups in gameplay, Go Go Fast is definitely worth checking out. 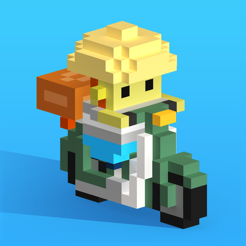