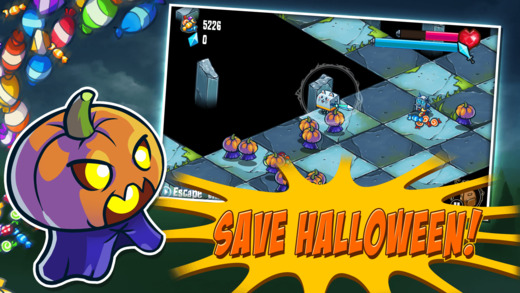 (This is one of many “My 2 Cents” reviews that I found on my old Tumblr page. It’s some of my earliest work. They may be a little rough around the edges, but still worth a read.) 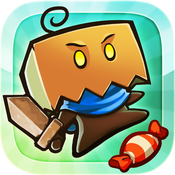 Slashy Hero: By The Gentlebros/Kongregate

Halloween is finally over, but I still have an iPhone full of Halloween themed games and spooky updates and you know what? I’m perfectly fine with that. Like I said before, I love me some Halloween games.
So, lately I’ve been playing this game called Slashy Hero by The Gentlebros. It’s a hack & slash game at heart, but with a pinch of roguelike and teaspoon of RPG. Mix it all up and you have Slashy Hero.
Per usual, I won’t get into the story. There’s really not much to it in this game, but I’ll leave it for the players to experience. I really didn’t find the need to have a long story in this game anyway. It’s the rest of the game that got me. 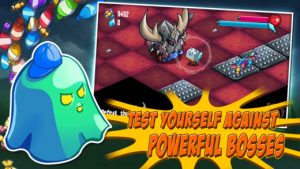 The object is simple. Hack and slash your way through 48 dungeons, fighting all kinds of different Halloween themed monsters and bosses. There are checkpoints every so often along your way. What I like is that you have your option on how you play the game. You can play it like a level based game and reach your checkpoints and once you die (and die you will), you can upgrade your character and start back at the last checkpoint you passed. There’s also what I like to call the “roguelike option” where you can get as far as you can, die, upgrade your character, and start over at the beginning again and see how far you can get each time. It’s a really cool idea. There is also an “Endless Mode” where you fight wave after wave of enemies, so the replayability factor is pretty high.
You move your character by holding your thumb wherever you want him to move and he will kind of follow your thumb around like a little lost puppy. Then when it’s time to fight, you trace a line through the enemies (kind of like a line drawing game) and your guy will “slash” through the monsters. Some enemies take only one slash to die while others take multiple times. With the line drawing mechanic, you can come up with some pretty cool combos. 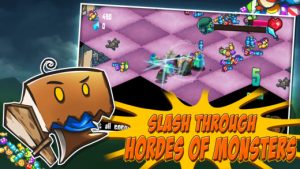 Dead monsters leave “candy” when they die.  You use your blood candy to upgrade your character after you perish. You can upgrade attack, health and speed. You can also collect different outfits and weapons that are found in treasure chests and left from your fallen enemies. These are all upgradable. Duplicate items can also be stacked and get stronger.
Slashy Hero will definitely stay on my device well after the Halloween season. I still have quite a few dungeons to go and then there’s always the Endless Mode to keep me busy. The Gentlebros did a great job with this one. Between the fun and challenging gameplay and beautiful cartoon looking artwork, I’ll be playing this one well into the future.