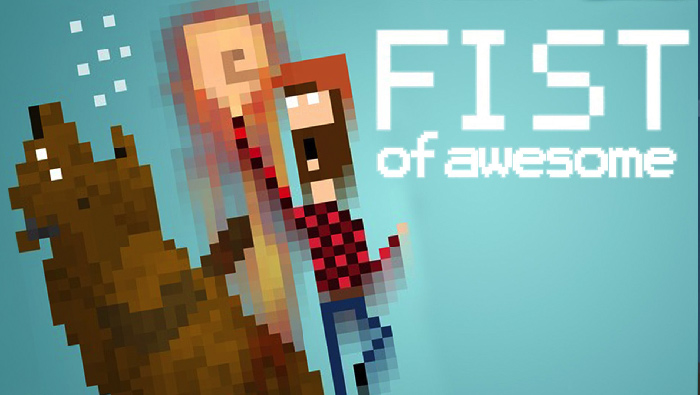 For those of you living in a cave 2013 was a big year for one particular lumberjack – Tim Burr. The game was Fist of Awesome by Nicoll Hunt and was released in October 2013 and featured on the UK App Store – no mean feat for the one-man-indie-army.  I caught up with Nicoll to delve beneath the beard and learn a little more about this intriguing ‘bear fighting’ game maker.

The following Indieview is from the Archive, mid 2014. Nicoll’s next release is Maximum Car out soon on iOS and Android.

Do you remember the moment when you first thought, ’Yep, I want to be involved in games!’?
When I was around 10 years old, my friend Lee he claimed his brother’s friend made computer games. To this day I have no idea if that was true, but it was at that moment I realised that computer games were made by real people and not by monolithic corporations in giant towers.

What was the first game you worked on/released that people played?
The first game I made was “Fat Ally Cleans The Streets”. It was a street sweeping simulator and was as awful as it sounds. You played an overweight street sweeper who had to catch a discarded can of cola which jittered around the screen like it was having a seizure.

I followed Fat Ally up with Fat Ally 2 Special Edition, which was terrible in whole new ways. I actually released it on the Internet of the time, where it was found by Amiga Future Magazine who described it as “The worst Amiga game that daylight has touched”.

Do you have a favourite food or drink you like to consume while making games?
TEA. Gallons and gallons of tea!

Is there anyone in the industry that you would like to work with?
If I could get over my ridiculous insecurities I’d love to work with Sos Sosowski. He made McPixel, the comedy and art style of which I stole mercilessly for FOA.

What’s in the pipeline for I Fight Bears?
The PC & Mac version of FIST OF AWESOME is nearing completion, and I should have some super-exciting news about that soon. I’m also having lots of fun prototyping ideas for the next game. So far I have a name and a genre, neither of which I’m willing to share quite yet. It’ll be great though. Really, really great.

A lot of gamers will know you from your successful Kickstarter campaign. How was the experience and do you have any advice for other indies looking to gain funding?
It was a living hell, don’t do it.

Oh wait, you said Kickstarter? Yeah, that was ace. It took up lots of time but it transformed me from someone that no-one had heard of to someone at least a dozen people had heard of. I managed to raise almost £12,000 to complete development of FOA, and made a ton of new friends in the process. My advice to other developers would be to only use Kickstarter for projects that you are massively passionate about, and then make damn sure you show that passion in your pitch video.

And finally, do you really fight bears?
Since I moved to London to start I Fight Bears there have been precisely zero bear attacks in the Greater London area. Coincidence? I’ll let you decide.

Fist of Awesome is OUT NOW on iOS, Android, OUYA & GameStick. Head over to the official FoA site for links.