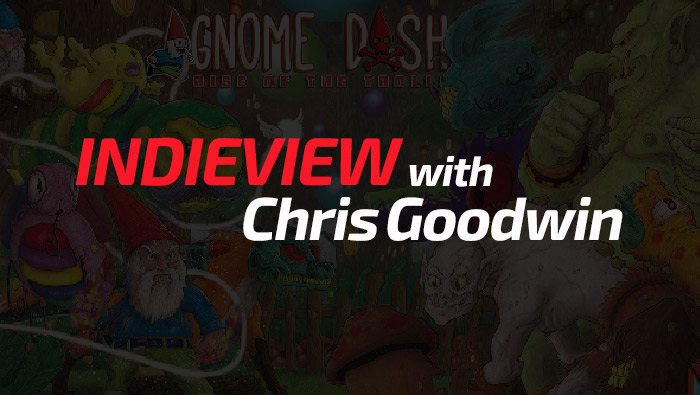 This week I got to virtually sit down with the “Head Gnome” himself, Chris Goodwin of SUPER-Goodwin Games. This is how it all shook out….

Welcome to SNAPPZILLA Mr. Goodwin!
Thanks for having me, sorry for any magical fart aroma that got trailed in I just had a meeting with the troll army right before this…

For all of those who don’t know who you are, tell our readers a little bit about yourself.
I am like everybody else looking for a good time and quality games! I love Gnomes and long strolls by the Enchanted Stream. Playing music (specifically jamming) is one of my favorite past times. Before getting into games I was a ‘multimedia’ dude building websites, print designs, and capturing some snapshots from behind the lens doing some wedding/newborn/family photography.

You know me, I’m ALWAYS looking for a good time (wink wink). So, you did everything yourself on Gnome Dash right? How did you come up with the idea/concept for it and how long did it end up taking you?
Let’s take a trip back in time….To be exact, let’s go three years prior to the release of the monster smash, Gnome Dash. A thought passes by, “Where is the fun and adventure in the top 100 mobile games in this world?” Then, a fairy whispered, “You, can make a game more fun my dear. Now get off the toilet and get to work!” This was the beginning of a passionate adventure turned destiny. It took about a year (in my free time) to get up to speed and adapt my coding (lots of typing and thinking), artistic (cramped forearms is a thing), and musical skills (guitars, drums, and flutes oh my!) then I was at a place where I thought “Ok now i’m ready to make a ‘real’ game”. With a puff from my bubble pipe it became clear the game would be themed around gnomes (it didn’t hurt that I have been collecting gnomes since I was a wee lad…) Now imagine a really cool two year montage with cut scenes of drawing, coding, silly cartwheels, playing instruments, and giving solid thumbs ups. When the loud 80’s music dies down we are left with an intriguing magical story with 700 individual hand drawn images, written code equivalent to one and a half Harry Potter Books, 20+ original songs written and recorded with over 25 different instruments, enter the world of Gnome Dash!

I can’t believe everything is self-taught! You sir, are a madman. So, now that Gnome Dash has been out for a month now, what’s your take on the mobile game industry? Is there anything you wish you could change?
What I like most about the industry is the few people I have met (Sam / Butterscotch Shenanigans, Stephen Loney / TweenGMS…) have been amazing, it’s a very close nit family and the energy is amazing. What would I change? The barrier to entry for a new developer with their first game is tough. If games could be based on the quality and not the manipulated political algorithms as so many other industries are this would help better games rise to the top.

Yea, that’s one of my favorite things about doing what I do. I get to meet tons of cool people in the industry. So, now that Gnome Dash is out in the wild and done, what’s next for Mr. Goodwin? Any future projects?
I believe it is important for an Indie developer to put themselves out there so I am currently working on a short video series going over the fun and interesting parts of how things go from idea to a fun interactive game and showing the world that Super Goodwin is just a normal guy working his butt off to make other people happy by enjoying a great game. After the ‘getting out there’ part of Gnome Dash is done then it’s on to one of three awesome projects:

1 – There has been a great response to the Faily Tap mini game inside Gnome Dash and I might possibly expand on that as a stand alone game with new levels, boss fights, and overall antics.
2 – Gnome Dash 2, You go back in time (before the trolls invade the gnome village) and get to play as the troll army assembling and preparing for the march to St. Relaxington Village. You can select different trolls, each with their own unique abilities. Expect rich content, humor, and hours of hidden gems to find.
3 – Secrets of the Tastiest Guitar Licks Ever – An open world action adventure game where you search to hunt down humorous spoofs on past legends where your goal is to defeat them to acquire the skills to learn, you guessed it, the Tastiest Guitar lick ever! Various magical battle axe guitars will be a must.

Yea, the Fairy Tap game IS pretty cool. FYI, I would love you forever if you made Gnome Dash 2…….and I mean FOREVER. You would never get rid of me. Last but not least. With SNAPPZILLA being a site for gamers, by gamers, do you play video games yourself? If so, what are some of your favorites?
Games I am currently playing: I am 90% done with Castelvania Symphony of the Night for PS1, You can always catch me playing Contra for NES when chillin with my gnomies, and when I am on the porcelain throne I have been stinking it up with the mobile game Leap Day.

I appreciate your time Chris. Good luck with everything in the future.
Thanks Noen, you guys at Snappzilla rock my socks off!

Make sure to pick up Gnome Dash on the App Store if you haven’t yet. You can always check out my review on it if you’re still wanting to know more about the game. 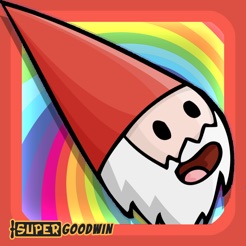