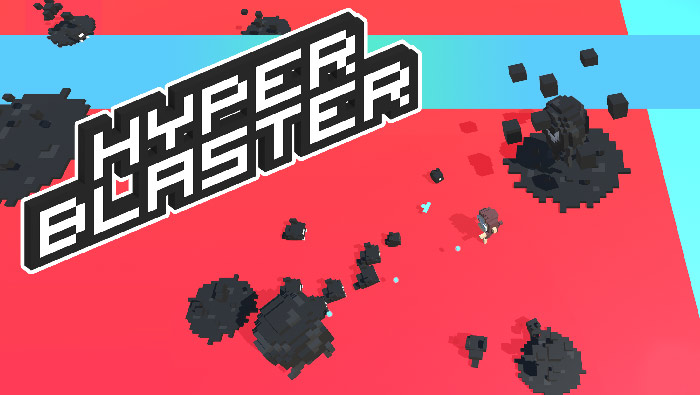 Spoiler alert. I love Hyper Blaster so it’s no surprise it’s going to get a glowing review with a great score!

I would honestly love to hear what your impression are of Hyper Blaster as I know the control mechanics really divide the gaming community. Drop a message in the comments below along with your score.

I’ve been playing Hyper Blaster for a week now and it ticks all the boxes I want in a quick, pick-up and play arcade game ideal for short bursts on the commute to and from work etc. [Yeah right – I’m playing it all hours of the day :D] 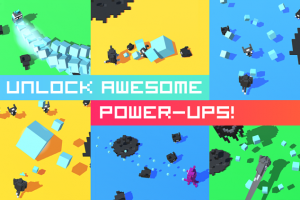 Dressed in a monkey voxel suit and old school 3d glasses you spawn in a square shaped hyper colourful arena armed with a rather tame gun and a unique dashing ability, and you must survive for as long as possible before the enemies swarm all over you.

These monochromatic voxel enemies come in various shapes and sizes which denotes their speed and attack characteristics. The smaller ones come at you like a rabid dog where on the other end of the scale, the oversized enemies walk around looking menacing but move fairly slowly like a carefree child skipping through the park.

The (bug alien like) enemies randomly spawn from various fixed spawn points, I like to think of them a bubbling pits of evil but essentially they look like oil spills. However, during your fight for survival other spawn points appear in seemingly random places making it a rather hostile place. So watch out, one enemy collision and it’s game over.

What better way to counter these pesky enemies than with an arsenal of weapons. As previously mentioned, the default gun is tame – single bullet with a standard fire rate. It has unlimited ammo but limited coolness. But don’t worry help is at hand, there are currently 8 powerful weapons to see you right. You have to unlock them individually by reaching a target score but once they’re all unlocked it’s payback time!

The weapons spawn periodically in random positions dotted around the arena and you never know which one you’re going to get. Learning how to use them is a real fun part of them game and I love the challenge offered by collecting a weapon that you’re not too keen on or doesn’t fit the current scenario – “Oh shit, not mines! Here comes that rabid dog enemy! Aaah!”

Even with all the firepower at your disposal you will die a lot, and I mean a lot. But it’s all fun and you will wanna jump back in straightaway. I posted my top 5 tips to Twitter last week which you can read here 😀

So I know what you’re thinking.

I haven’t described the controls after opening this review with a flitting remark on how the controls are dividing gamers. Well I want you to make up your own decision – hah! What I can tell you, is that you simply tap anywhere to move and tap and hold to shoot. Which means you can’t do both at the same time so the challenge is on. Hyper Blaster was built around these touch controls and you benefit from being able to immediately move swiftly from different parts of the arena with a simple tap. I must admit it took me a solid 5 mins to grasp them but I’m really enjoying it.

Hyper Blaster is FREE to play and supported with interstitial ads, plus they’re the friendly skippable videos so no harm there. I would suggest buying the Tier 1 IAP (there’s only 1) which removes the ads and supports the dev so he can feed the voxel characters with tasty pixely treats.

There are also 2 modes to contend with – Normal and Turbo. Let’s just say if you think Normal is hard wait until you try Turbo. It’s pretty damn scary/hard/crazy/hyper!

Hyper Blaster would be even better and I would award it 5 super cool shiny stars if it had Game Center integration, more character unlocks, perhaps one with a special ability, extra weapons and a challenge mode (think GC achievements style – like survive for 20s and so on). Right now you can still ENJOY (!!!) Hyper Blaster and get a kick out of it so I urge you to give it a go! 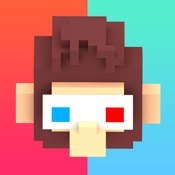