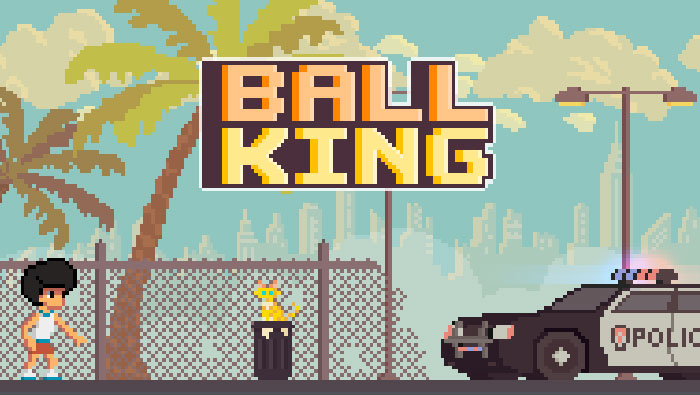 If you have watched the video above then you will already have a good idea of the game mechanics behind Ball King. What it doesn’t show you, is how addictive this fun little basket shooter is!

You play as one of 10 characters (unlocked as you progress) positioned on the left side of the screen and the net is floating above you, randomly positioned of course. After each shot the net repositions itself which means you need to adjust your trajectory and consider the wind strength and direction which is displayed neatly on the board.

There are 3 game modes to chose from Challenge, Time Trial and Practice, the latter was recently included in the latest update.

Challenge is super hard, well for me anyway. You only have 1 life so if you miss the net it’s instant game over. I’m currently on 12 points and found it so hard (I’m just not that good) I moved onto to Time Trial.

This mode is much more forgiving. As the name suggests you are pitted against the clock and you have 60s to get as many baskets as possible. If you miss, 1 point is deducted from your score so there is a penalty for messing up and it prevents the player from frantically firing off as many balls as possible without any regard for accuracy of the shot.

There are 76 objects (balls), 10 characters and 6 themes (which are unlocked after you’ve collected a particular combo of objects), so there is lots to keep you busy. The developer has added lots of nice touches, which each individual object making it’s own unique sound flying through the air to the basket as well dropping down to the car or what have you below. Ball King is a carefully crafted casual game which will make you smile.

It’s the 1 year anniversary of Ball King since releasing on the App Store, so my advice is download this now if you enjoy quick pickup and play games, with neat pixel art, a sense of humour and of course shooting baskets! Oh yeah, it’s FREE and the IAPs are there if you’re in a hurry to collect all the goodies!

Can you beat my current score of 87? Let us know in the comments below.