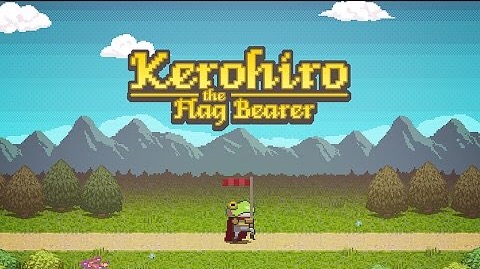 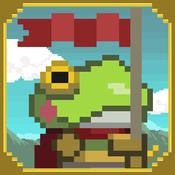 So, I ran across Kerohiro (Kee-roe-hero?) a couple weeks ago while doing my usual Wednesday/Thursday new release search. I wasn’t expecting a whole lot, but I’m a sucker for pixel art. Little did I know how much this game was going to surprise me…..

People who have played NimbleBit’s game, NimbleQuest will feel “somewhat” at home with Kerohiro. Best way to describe it is that it’s like NimbleQuest, but with a story and a little better upgrading system.

Kerohiro is like a game of Snake, but with frogs. (Yea, that made more sense in my head.) The main character in the story is Kerohiro and as you can tell by the title of the game, Kerohiro is a lowly flag bearer. Without giving too much of the story away (The story is half way decent.), Kerohiro needs to uncover a secret conspiracy going on in the kingdom. He starts off alone, but quickly figures out that he’s going to need help if he’s going to survive. 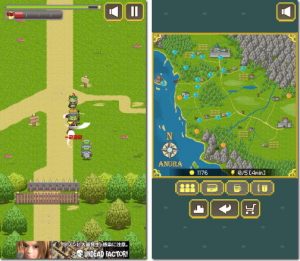 There is actually a lot of strategy involved when playing. Each character in your crew attacks differently. Some carry a sword and have to be right in front or behind an enemie to strike, some characters like mages and archers can attack from a distance in all directions. Some leave bombs or traps and don’t attack at all. So you need to strategize on where to place each character in your group so they can be the most effective. I found myself not wanting to go at enemies head-on and try more of a “side-swiping” approach or coming at them from behind and attacking. Each character has a special power move that builds up each time they attack, so that also comes into play when your figuring out how to set up your crew. Also, each character’s attack and defense can be upgraded. Like I said, there’s all kinds of ways to strategize. 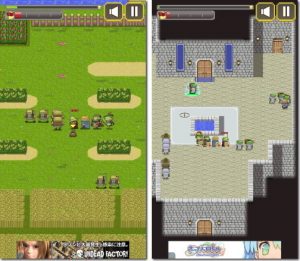 There are roughly around 42 levels throughout the story. You have your main story missions and there are also side quests to do to help when your grinding. Trust me, you WILL be grinding a little in this game. There is a pub that you can go to whenever you want and talk to patrons there. Most of them will give you your side quests there. It’s always a good place to go if your stuck and need to level up. You can gain quick cash or unique relics that you can use to enhance your abilities. Your abilities can be combined with different relics in a unique puzzle grid. It’s kind of hard to explain the puzzle grid. Basically each relic you find or earn, you put in this puzzle looking thing and you can stack relics to make them stronger. Some relics work differently when linked next to a different relic. It all effects your stats though. It’s kind of a neat little system.

Now, on to the pay system……
So, Kerohiro is free to play of course. There is an ad banner that runs along the bottom of the screen in between levels and full screen ads pop up every once in a great while. Ads can be removed for $.99 USD. My only issue is that there IS a timer system unfortunately. Each level costs one “energy” with a cap of 5 energy to start off with. There are only IAPs to raise the max energy up to 10. There is no “get rid of timers” IAP. You can also watch a quick video to get an energy. To be honest, it never really affected me too much while playing. Energy replenishes pretty fast. There were only a couple times where I had to watch an ad for another run or put the game down, but don’t let the play timer keep you from trying out this gem.

I’ve had a great time playing Kerohiro: The Flag Bearer. Yea, it can be a slower paced game to some and the play timer may be a turn off some people, but neither of it phased me one bit. The pixel art and soundtrack are both excellent and the story isn’t half bad. I love when I find gems like this. Definitely give this one a go. Especially if your a fan of these kind of Snake style RPGs. There’s not too many on the App Store, but this is probably the best one I’ve played yet.