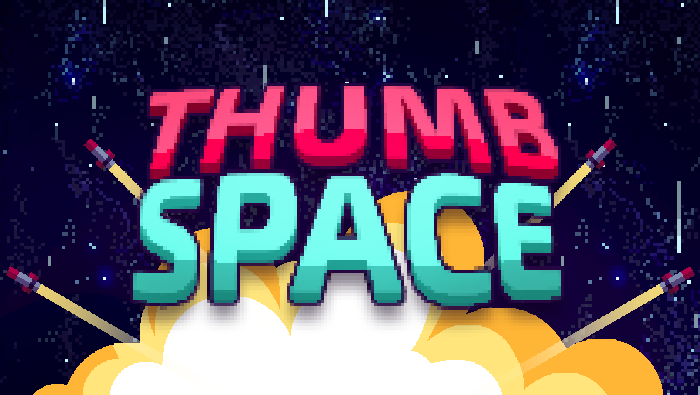 With this week’s crop of game releases on the App Store, I’ve had a chance to sink some time into Thumb Space and so far I’ve really liked what I’ve played.

Hey guys – DEADJAM here. The following review by Noen is 100% impartial even though I’m the Producer on Thumb Space. Noen is all the way across the ocean so I couldn’t even look him in the eye and ask for a favour! We take our games and reviews seriously. So read on and let us know in the comments what you think.

Thumb Space is another one of those “one finger high score chasers” that are so popular at the moment. Like I’ve said in other reviews, I’m not a huge fan of these style games (especially with Game Center having issues right now), so it takes a lot to keep my attention for more than a few minutes. This one did. I’m still playing it.

It takes a few minutes to get the hang of Thumb Space. You rest your thumb on the screen to move your ship around and let off to shoot. For some reason, this took me a minute to get used to. Anyway, you have these gems of sorts that are coming down the screen at a decent clip and there is no way around them but to shoot them. Sounds easy right? It’s is at first, but when these things start dropping down one after another and there in absolutely no room for error, it can get TOUGH! 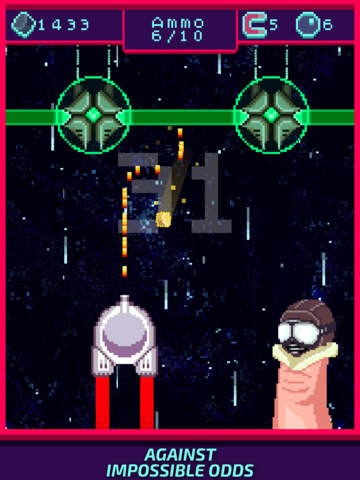 The only thing that frustrated me a little was reloading. After you fire off 10 rounds you need to reload, but the reload button is all the way at the top of the screen. I played on an iPhone 6 with my right hand and it was still tough trying to reach my thumb up to the top of the screen to hit the button. I found myself having to use my left hand to tap the button without blocking the screen while doing it. It’s not a big deal in the beginning of a run, but when you have a ton of things going on, it can sometimes cause a problem. I died many of times during a reload. It’s not a huge deal, but I just wanted to point it out. Maybe a reload button toward the bottom of the screen would work better?

What I really like about this game is that there is more to the game than just shooting gems to get a high score. There are also bosses that you can reach once you get so far in a run. It’s a nice break when your just barely making it through a run. It at least give you a split second to get your bearings straight. There’s also a ton of extras in this game. I mean a TON! You have a bunch of different (cosmetic) ships that you can buy, trails that follow behind you, different themes, weapons, and even mods that change up the game entirely and most can be purchased with in-game currency. There are IAPs (in app purchases) to unlock each category if your impatient. There’s even an IAP to unlock everything for $3.99 USD. There’s also the usual IAP for currency if you need a little more and don’t have time to play for it.

All in all, I’m pretty happy with Thumb Space. With all the high score chasers released on a daily basis, it’s hard to make one and have it stand out. I think that says a lot about this one.

Definitely check this one out next time your on the App Store.