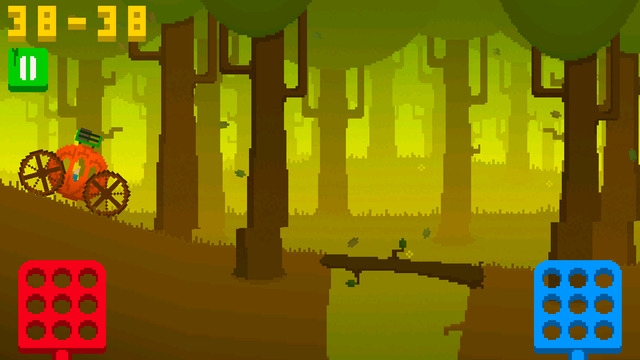 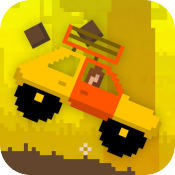 I guess you could say that Wild Roads is in the “Hill Climber” category, but it’s odd. As much as the game is the same as most in this genre, it’s also different. Once you fire the game up, you’ll feel right at home. Your driving a vehicle and trying to get as far as you can without wrecking. The gas is on the right side of the screen and brake is on the left. You know, the usual. But for some reason, this game just “feels” different. There’s no IAP’s or timers to clutter up the screen. There’s no coins to collect. Hell, there’s not even a story! That’s what I really like about this game though. I don’t know if it’s the beautiful colors in the pixelated background, or the way your vehicle handles on the bumps and bridges, but it’s nice kind of making up your own story for the game or just relaxing and driving down the road and checking out the scenery. It almost feels like it’s not a game at all. Sure, it keep s track of how far you go and what’s your record. There are even a bunch of different vehicles and drivers that unlock, but there’s no grinding to get them. One driver or vehicle unlocks after every run unless you wreck your ride. Then you get nothing. There’s not even a fuel gauge. There is absolutely no pressure in this “game” besides trying not to lose the load that’s in the back of your truck. It feels more like a passion project that the developer wanted to share with everyone.

I know it all sounds crazy, but seriously, try it. I’ve been having a good time just cruising down the bumpy roads, listening to the beautiful soundtrack and waiting to see what unlocks next. This might not be for everybody. Like I said, there’s not much “game” to Wild Roads, but what it does offer is pretty fun in my opinion and is at least worth a download and a few runs.