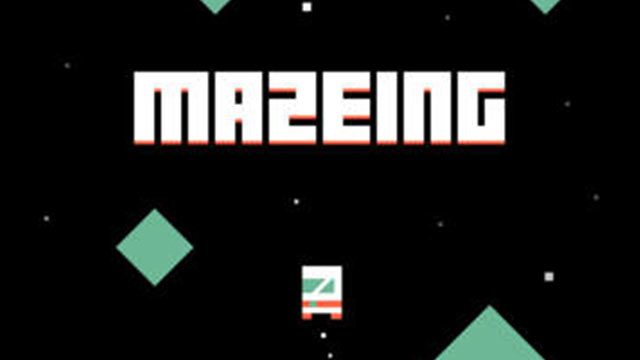 I purchased Mazeing when it was Featured by Apple on the UK Store at the end of last year and I’m so glad I did.

Mazeing is one of the games where if you’re feeling a little impatient you might not stick with it. I’m one of those gamers who gets easily frustrated if things aren’t going my way. So after multiple bursts of dying in quick succession I almost conceded. But I’m so happy I stuck with it.

First off, the music track is damn good, it’s up there in my iOS Hall of Fame music tracks alongside, Foursaken Media’s, NY Zombie, my very own MAYHEM! (not sure if I’m allowed to plug my own game? But I just did!) and the recently released Chrome Death.

Mazeing opens with a long electronic track intro that helps suggest a feeling of isolation and melancholy as the spaceman on the title screen spins helplessly and endlessly – as if he’s lost in space. The track then builds up slowly and continues as you jump into the game.

Played vertically, Mazeing is a bit like the arcade classic Pong meets Asteroids. You control the Spaceman and by simply tapping and holding the screen you power the thrust to move the little fella. On the left and right side of the screen are two barriers (bit like the paddles from pong) filling the screen from top to bottom. By colliding with the barrier using your Spaceman you clock up 1 point for each impact and so you bounce from left and right as though you were a ping pong ball. Of course there are hazards to avoid such as floating debris and killer space whales so be extremely careful because you can only take two hits before it’s game and you must start again.

To spice things up, there is gravity to contend with which is pulling you downwards and if you fall off the screen it’s instant death, however, if that wasn’t enough to contend with, there is a neat little spin on the game – literally. Every so often a horizontal bar scrolls down the screen, with the debris and killer space whales and once the Spaceman crosses this bar the gravitational pull reverses and you are pulled up to the top. This shift in the controls of the game really keeps you on your toes and you have to mentally remind yourself to apply the right amount of pressure on the screen so that you don’t fly off as soon as the switch happens.

Alongside the regular game mode, there are 28 challenge levels, dubbed ‘trials’ and they’re unlocked by reaching a target score in regular mode. These challenges extend the game and make it so much more than a high score chaser as you have to navigate these fixed levels which are essentially a bit like a puzzle game with extra functionality which dissent appear in the regular game.

This is a fantastic indie title worth checking out, so go buy Mazeing on IOS and tell us what you think in the comments below.