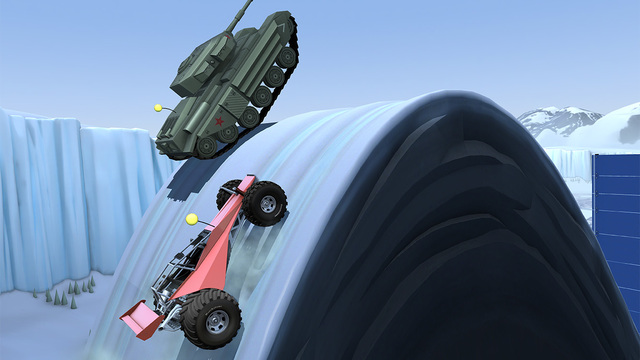 Hutch has been known for some really great titles on the App Store. Smash Cops, Smash Cops Heat, Smash Bandits, and MMX Racing. I’ve had a blast with all of them. Their next project is called MMX Hill Climb and is soft launched currently in the NZ App Store. It’s free to play right now with a dual currency, but NO TIMERS!

I’m sure you could probably guess by the name, that this is Hutch’s take on the hill climb genre. Hill climb racing games have always been fun for me. The App Store is literally filled with them. That’s a good and a bad thing though. I’ve played so many of these types of games and it’s tough to get right. The physics can pretty much make or break hill climb games.

I’m glad to say that Hutch is on the right track with MMX HC. They have used the art style and trucks from their previous MMX game and put together a pretty nice spinoff. The original MMX game had more of a drag racing feel to it, where this game “feels” like you have a little more control on your vehicle.

The controls are pretty much the same as most games in this genre. Right side of the screen for gas and tilt forward (while in air) and left side for brake and tilt backward. It’s a pretty common and simple control scheme, but it works really well.

The game can be a bit tough at times…….well, it’s a bit tough a LOT of the time. The trucks can be a bit “top heavy” and tend to want to flip over as soon as you punch the gas. Once you get some time in and get the hang of things, it tends to get easier. It’s all about feathering that gas pedal.

Well, it wouldn’t be a hill climbing game without upgrades right? Well, MMX HC has plenty of them. You start out with a bare bones vehicle of course and in order to upgrade, you must collect coins on the tracks. You can upgrade your speed, traction, stability, and tilt. So, it’s all about grinding in order to collect enough coins to upgrade. There are six different trucks you can buy with premium currency, or you can get them for free by passing a few tests.

So far I’ve been enjoying MMX Hill Climb. Like I said, it can be a little tough at times and you’ll need to grind out a few tracks in order to get past the places you are stuck. There are 10 different tracks and 3 endless tracks so far. The game really starts getting good once you reach the desert levels. I will say that the game does feel like it’s missing something right now. The UI is pretty basic and kind of boring looking when your in between levels looking at upgrades. I would have liked to see some accessories too. There are no rims you can buy or paint jobs or decals or anything to make your truck a little more personalized. It’s still fairly early in its soft launch, so maybe it will get added in a future update. I remember the original MMX Racing game was a little bare bones in the beginning also and look how that worked out! I still feel that it’s a solid game and look forward to it releasing worldwide.

Hutch just released a huge update on April 26th adding new vehicles, new tracks, tons of fixes and polishing. Most of my issues with the game have all been fixed. The game is really starting to take shape now. The only thing I’m still missing is the ability to paint your truck and add accessories or personalization options. I’m hoping they are in the works though and we’ll see them by the time MMX HC releases worldwide. Hutch has done a great job so far. I can’t wait to see what’s next. Definitely keep your eyes peeled for this one now.