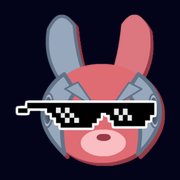 With so many games releasing on the App Store daily, it’s easy to miss games that quietly get released by indie developers. Especially games that have absolutely no press about them. I ran into Hoptron 5000 while just poking through the App Store looking for something to catch my eye. I’m glad I stopped at this one because it’s hilarious and a real gem.

Your character is a Samurai Robot Ninja Bunny names Hoptron that gets his burrito stolen by the evil jerk face, Magic-Man. (You can’t make this stuff up……well, I guess you can because then developer did, but still. You get my point.) Magic-Man then banishes him to Evil Giant Food World to “die like an idiot”, but Hoptron isn’t going out like that of course. There is a whole little story in the beginning of the game that has full voice overs and is absolutely hilarious.

After a brief (but funny) tutorial, you start your journey in Evil Giant Food World where you slash and slice your way through waves of different evil fruit. The game is a button masher at heart, but it has a style and finesse to it. The on-screen buttons on the left side of the screen are for moving left and right. Then there is a single button on the right used for your attacks. This is where the finesse comes in….

The attack button is pretty much an oversized circle. A single tap on the attack button will hack & slash enemies like a normal button masher game, but swiping up inside the attack circle will cause Hoptron to jump. Then if you swipe left, right, or down, it causes him to do a slashing motion that is really cool. The single tap will fight enemies one at a time, but by swiping, you can slash through several evil fruit in one quick slash. You also have throwing stars that you can use by tapping anywhere outside of the attack circle. This is good for flying enemies like those pesky flying bananas.

There is also a pretty nice upgrade system in the game. You gain “awesome points” by killing enemies and by completing different missions in the game. These awesome points can be used to upgrade your “boosters”. You can upgrade your health, your damage, the length of your sword, and to buy and upgrade different moves. The game can get pretty difficult at times, so you will need these upgrades if you ever want to get to Magic-Man and his several mini-bosses.

As far as any downsides in the game, I really haven’t came across too many. Yea, it’s not the prettiest looking game on the App Store and it’s not like it has a huge soundtrack to it with a million piece orchestra, but I actually like the simple looking artwork. It almost looks like a little kid wrote it out. It has a certain South Park charm to it. Controlling Hoptron sometimes can be finicky. If you slide your finger too far, you will lose contact with the virtual buttons causing you to hear that horrific yet oh so cute squeak he makes when he gets hit by an enemy. The controls aren’t perfect, but they work.

Of course the game is free to play, so we can’t go through a review without talking about THAT stuff, but I’ll be happy to tell you that Robosauce does an excellent job at monetizing Hoptron 5000. There are absolutely no timers in the game, so you can play until your fingers bleed samurai robot ninja blood. There is one single currency (awesome points), so there is nothing locked behind IAPs. There are no forced ads in the game. The only ads you will see is if you want to continue a run, you can watch an optional ad to continue where you left off. There are only a few IAPs and they are only for a currency doubler, a loot doubler, and two different “awesome point” packs. The highest IAP is only $2.99. With the currency and loot doublers both being $1.99 each, I would have liked to see a little discount package for buying both, but hey, developers have to eat too, so I understand.

All in all, I absolutely loved this game. It’s humor, charm and wittiness definitely is its strong points, but the game as a whole is very well done. Games like Hoptron 5000 are the reason why I love mobile gaming and love supporting indie developers. Definitely check this one out!