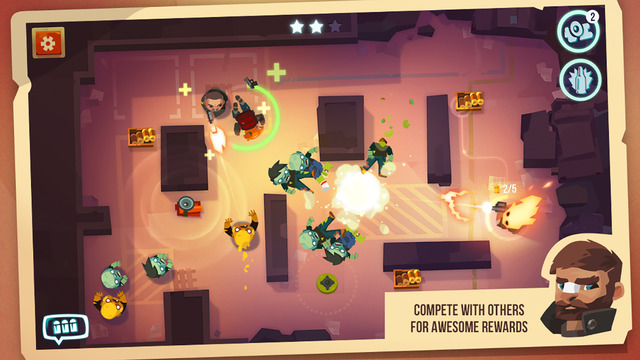 Survivor Squad has been on our radar since it first soft launched on the App Store. It’s pretty much an online multiplayer shooter at heart, but it also has several different styles of gameplay to mix things up.

Without giving too much away, I’ll just say that there IS a story that goes along with everything. It’s split up between 5 chapters (so far). Matches are usually really quick missions that last around two minutes or so, which is perfect for quick pick up and play gaming. The missions range from “kill everything that moves”, to moving crates from point A to point B. With each match you are set up with two other online players against a bunch of blood-thirsty zombies. You have to work together to finish each mission. If you or another person gets killed during a match, you can be revived by one of your teammates by them simply standing over you for a set time. If all three of you die, it’s “game over”.

Your character automatically shoots the nearest zombie in range. All you have to do is tap the screen to where you want your character to move and keep and eye on that ammo! The more you play and the more you win, the more experience you earn. The higher your level, the better weapons you can get. Weapons are all upgradable too.

The game is “free to play”, so there are two different currencies and there is an “energy” timer. That is my only issue with the game so far. You only have five matches before your energy runs out and then you either wait it out, or pay to refill your “hearts”. Hopefully that will change a little before the game releases worldwide. Personally, I think the energy system needs to be tweaked a little.  You can burn through your 5 hearts pretty quickly at times.

All in all, I’m having a great time with Survivor Squad. Definitely keep your eye out for this one when it releases on the App Store in the near future.